This section provides an overview of the Python Package from a functionality perspective. If you wish to see examples check the Python Simple & Advanced Examples section all the classes and their respective functions you can find that in the Python Class Reference Section.

Below is a diagram that provides insights on the relationship between Kompute objects and Vulkan SDK resources, which primarily encompass ownership of either CPU and/or GPU memory. 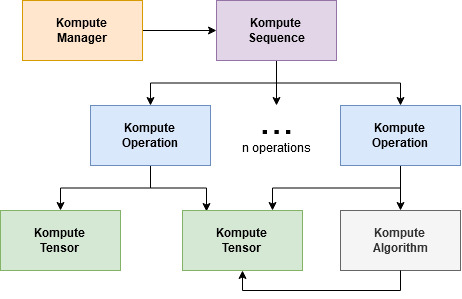 Make sure you have the following dependencies installed:

Once you set up the package dependencies, you can install Kompute from `Pypi` using `pip` by running:

You can also install from master branch using:

One thing that you will notice is that the class kp::OpBase and all its relevant operator subclasses are not exposed in Python.

This is primarily because the way to interact with the operations are through the respective kp.Manager and kp.Sequence functions.

More specifically, it can be through the following functions:

The kp.Tensor component provides utilities to load and manage data into GPU memory.

The primary interface to the GPU image leverage np.array containers which wrap the GPU memory.

One of the key things to take into consideration is the GPU memory and resource management that is provided by Kompute - namely the kp.Tensor allows for the memory to be managed until the python object refcount goes down to zero or is explicitly destroyed with the destroy() function.

Another thing to bare in mind is that when the .data() function is called, the numpy array would add an extra refcount, and the underlying resources won’t be destroyed until that object is destroyed. This is shown more intuitively in the example below:

Logging inside the C++ uses the PyBind logging, which allows for all the std::cout to be passed to a python logger.

All python output is logged to the logger with the name kp. You can interact with the logger similar to any python logging as per the example below: